This talk is about my meeting with Tulku Urgyen Rinpoche. The meeting took place in a kind of timeless dimension, and that means that when I talk about it I am not talking about it as a memory of an event in 1989, but as something that is as vividly present today as it was then. I want to talk about it in order to tell you what it looks like right now. Naturally at one level it has changed a lot since 1989, but at another level the essence is the same.

The meeting was not just a personal event. It was much more of a collective event. It was a genuine meeting between modern Western culture and the ancient, spiritual culture of Tibet. A luminous bridge was lit between the two dimensions: the modern Western way of thought and life and ancient, Eastern wisdom. An image comes to mind: in my physics class at school we experimented with something called carbon arc light. We had two carbon rods, one with positive electric current and the other with negative current. When they were brought sufﬁciently close together, an electric arc between them generated a very bright light. In the same way my meeting with Tulku Urgyen Rinpoche brought together a Western way – with its search for the meaning of life and with its attempt to realize deeper levels of love and awareness – and a kind of Eastern expert dimension.

To integrate these two dimensions it is necessary to extract the essence of Eastern wisdom from Eastern cultural background. To ﬁnd what is valid, regardless of race, colour, or culture. Buddhism has more than two thousand years of experience with successfully transferring a living esoteric tradition to foreign cultures.

It was clear that what I received from Rinpoche was embedded in a certain culture and tradition, namely Tibetan Buddhism and Dzogchen. It has taken many years to distinguish the cultural trappings from the essence of Rinpoche’s trans-missions. It sounds easy to make this distinction, but in fact it is not. As we all know, many people around the world – including leading ﬁgures in Tibetan Buddhism – are part of this process of using scientiﬁc principles to distill the essential principles and dynamics of Buddhism and integrate them with Western tradition. Because of its strong emphasis on empiricism and logic, the teaching tradition of Tibetan Buddhism is highly compatible with such an approach.

In the West we have an extremely simplistic view of spiritual growth and spirituality. Seen from the East, to borrow Tulku Urgyen Rinpoche’s perspective, we are like a kindergarten while he is in the forefront of academic research. The difference between the two cultures is extreme: the layers, rhythms and structures of spiritual practice and the perspective of time involved are literally worlds apart. To the modern and secularized West spirituality must be fast and available to everybody. We should be able to gain enlightenment in the course of a few workshops, or we should at least be able to use our Western technology to ﬁnd some ‘quick ﬁx’ techniques that could improve the slow and tedious techniques of the East and bring enlightenment to people by the thousands. This is a gentle caricature of the naïve Western ideas of spiritual progression. In our context with its approximately 1000 people, we need to change that idea. We have to get used to how delicate, slow, and complicated this process is. What we are searching for is some-thing we all have, and the West goes for it with an eagerness both Christian and democratic. But we are no faster than the East. And that means that we are moving at a very slow pace like a snail, and by the time the snail has crawled across the computer, the model has changed. We are talking about uniting two very different systems.

From my point of view the task has several parts. First, we Westerners need to get into spiritual secondary school or perhaps even high school, so that we achieve a more subtle perspective. Next, we need to discern the cultural aspects of the Eastern traditions, and to respect them but not adopt them. And ﬁnally we need to be clear about the Western principles and concepts that deﬁne our ﬁnest qualities, and build on them in our meeting with the Eastern esoteric dimensions.

I have simpliﬁed matters, but the point is that discerning the cultural trappings and reﬁning our view of spirituality makes the process of productive integration rather slow and difﬁcult.

A lot has happened, I think. Vaekstcenteret has absorbed the ﬁrst stage really well, and around 1000 people have become more subtle in their approach to spirituality and in their understanding of the particular practice of Dzogchen. To be honest, as a group we have not progressed very much. But we have progressed somewhat. And on the other hand, we have managed to incorporate a lot of the heavy and difﬁcult material of our lives.

There are four basic Western concepts that we Westerners need to hold on to in our meeting with Dzogchen:

We need the scientiﬁc approach to the world. We cannot let go of that. I understand scholar-ship or the scientiﬁc approach as a process of achieving understanding, without arriving at the ultimate truth, but constantly trying to be more and more precise within a ﬁeld of research. This, I think, is important. Science has come up with many ﬁne realizations that are still being reﬁned: think of the long history of our understanding of our place in the cosmos. 500 years ago Western culture believed in a ﬂat earth with us as the center of creation – today we know ourselves to be a tiny life-form on a speck of dust circling a small star far out in one spiral arm of one galaxy of an enormous universe. During those 500 years, the West has reﬁned methods to investigate and deal with the outer world. Tibet spent that time reﬁning methods to investigate and deal with the inner world.

Also, in the West we have a well documented and highly developed theory of evolution, both in biology and physics. This theory of evolution puts us in the position to be able to see the evolutionary state of cosmos at the moment. And looking back from historical, mythological, and archaeological perspectives, we also seem to be able to observe within man an evolution of consciousness. Such a concept is not common in the East. I believe that this is a very advantageous concept that we need to hang on to for a while.

In biology we may ﬁnd another example of the importance of science. Buddhist thought has it that we are not to kill any sentient beings. Many kinds of strategies exist to avoid this. Rather be a vegetarian than kill animals, and insects and microbes are to be considered animals rather than vegetables. However, modern Western biology shows that no human being can exist without killing microbes. Our digestive systems necessitate that we kill thousands of sentient beings in order to survive. This is a scientiﬁc fact that we have to integrate with a kind of sensible, Buddhist ethic of limited killing! Modiﬁed by science, our understanding moves from a kind of ultimate truth to a far more relativistic world.

The second concept that comes out of current Western experience is the appropriateness of democracy when dealing with a lot of people, large groups and probably mankind as such. Winston Churchill called democracy the worst form of government except for all the others that have been tried. We need to hang on to the appropriateness of democratic thought. But this must be combined with a hierarchical model that to some extent seems to be necessary in a spiritual process - as indeed in any special training. A hierarchical structure according to talent, skill, and effort seems to emerge. We cannot all play soccer like Ronaldinho, however much we enjoy playing with a ball. Ronaldinho is high up in the hierarchy and John Doe is low down, even though they are both democrats. We have to somehow ﬁnd a balance between hierarchical structure and a form of democracy. And this is particularly difﬁcult in a spiritual context. We have not solved this problem in our community, but we are trying to create democratic processes that we then try to balance with hierarchical ones. I do not think that we have the solution yet, but we have established the groundwork to be elaborated on.

The Feminine and the Masculine

The balance between the masculine and the feminine is the third concept. In all the ancient, spiritual traditions, including Tibetan Buddhism, men and women were distinctly unequal in their access to spiritual training, to the extent that one has to search high and low to ﬁnd detailed descriptions of the spiritual process from a feminine point of view. Fortunately, both texts and practices by women do exist, but they are few and far between. Many of us ﬁnd this inequality unacceptable. Many leaders and teachers in Buddhism and Tibetan Buddhism today are making special efforts to improve conditions for women with a spiritual practice. We cannot imagine a spiritual progression in the West or a more exact scientiﬁc educational program that is not based on complete equality between men and women. Furthermore, we need to carefully describe speciﬁc feminine traits, because they exist at least on some levels of spiritual training, just as speciﬁc masculine traits exist. This, of course, has to be done by women and not by men. We need women to begin to describe their genuine experiences on the spiritual path. This process has begun, not just in our community but elsewhere in the West as well.

The last concept has to do with the fact that we live in a Christian culture no matter how secularized it is, and no matter how fragile the Christian element. Jung would say that these elements have become archetypes. They are so embedded in the Western psyche that we all carry them. We need to ﬁnd a kind of balance or integration between the Eastern concepts that we have started working with and some of our basic Christian structures.

We know that whenever Buddhism has successfully spread to a new part of the world, its essence has been maintained, while many traditions and rituals have changed. In our own Scandinavian history we have seen signs of the opposite; that the deepest esoteric practices of Christianity failed to take root and seek nourishment in the northern pre-Christian shamanic culture, while at the same time Christian ritual replaced the old forms of worship. It seems that authentic spiritual practice must embed itself in the soil of local culture to ﬂourish.

We must be aware of these issues as we approach the practice of Dzogchen. This is in fact a rather complicated affair. We need to remember that we have Danish soil under our feet. 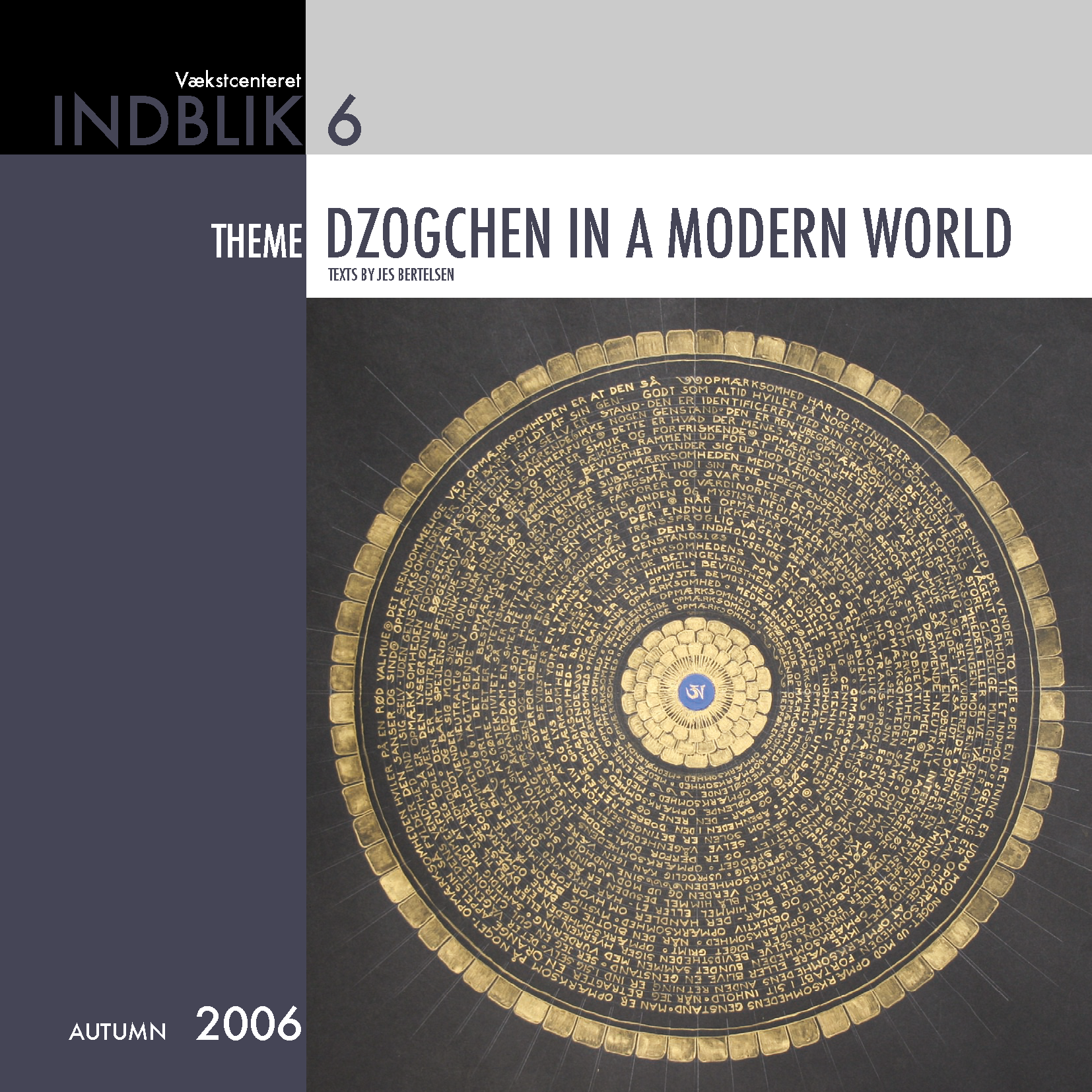 Excerpt from INDBLIK 6 – a theme publication on DZOGCHEN IN A MODERN WORLD, texts by Jes Bertelsen, Vaekstcenteret 2006

Publication as pdf for dowload.